The College at Brockport Women and Gender Studies Program

The College at Brockport Women and Gender Studies Program 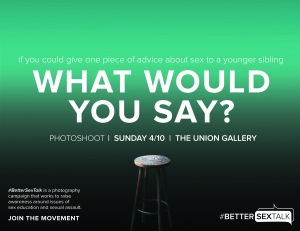 The aim of the project is to strive for improvements in sexual education, raise awareness for sexual assault and create a culture of consent. The Better Sex Talk campaign sheds light on critical information that is absent in sexual education courses, empowering college students from different backgrounds to use their own experiences to fill in those gaps.

The first 50 students to sign up for a five-minute time slot will have their picture taken, have their quote superimposed on their photo and their advice will become part of this important collegiate movement.

On Sunday, April 10th from 12 – 4 pm in the Union Gallery come have your picture taken & answer the question “If you could give one piece of advice to your younger sibling about sex what would you say?”.

Learn more about the Better Sex Talk Campaign at https://www.facebook.com/bettersextalk/  or  http://www.bstcampaign.org/

The Little Theatre, WXXI & The Susan B. Anthony Institute for Gender and Women’s Studies are proud to present a series of movies titled Honoring Women in Public Service to honor Women’s History Month.

Dr. Barb LeSavoy, Director of The Women & Gender Studies Program here at The College at Brockport will be a panelist for two of the films: Dreamcatcher (3/6) and Sworn Virgin (3/20).

For more information about the schedule, individual films, ticket prices, moderators, and panelists please download the complete booklet below.

This semester, the Women & Gender Studies Department at The College at Brockport is revamping and refocusing our blog! This semester we will be focusing on the work and experiences of our students, faculty & alumni.

We want YOU to be involved! Are you faculty who recently had an article or interview published? Are you a student who wrote an exceptional paper or created an exceptional presentation? Are you a WMS alumni with an unusual job or career?  Then we want to hear from you, and share your accomplishments with our readers!

I recently read a great article on everydayfeminism.com that gave nine great ways that we can make social movements less elitist and more accessible. They certainly are worth repeating!

Consent (noun): Permission to have something done or to do something. (verb): Give permission for something to happen.

Recently California became the first state to take action on consent lessons being taught in high schools. Beginning next year they’ll be teaching consent to those wide-eyed and eager students. As a feminist, a woman and a human being in society, I feel as though this is great news!

The news of this becoming law in California has had my head reeling with thoughts of my past, stories that friends have told me and the consent workshop that I helped organize in the Fall of 2013. A lot of people have an idea of an assumed consent – that because they know you, it’s okay to do things. The simple action of hugging someone or rubbing their back can be a true invasion of space and make the receiver feel violated.

Think about the way we talk to little kids. When they don’t know someone very well or feel a bit uncomfortable with a situation of seeing someone new, we coerce them into greeting them usually with a hug. I can personally remember being a small child and not wanting certain people to touch me. One cousin would always tickle me and force hugs on me, he was much older – almost my mother’s age. I was expected to just accept him and allow him to tickle me, tease me and hug me; even if it left me feeling uncomfortable. I recently, as a thirty-something year old, had the talk with my mother about it and explained how uncomfortable he made me feel. She recognized that I usually expressed that I didn’t want him to come near me, that I hated being tickled and because of that I didn’t want to interact with him. My cousin isn’t a malicious person, he’s playful but doesn’t really know the meaning of consent – at least not every day consent. My mother actually told me that looking back on it now she would have done things differently, she would have told him to respect my boundaries and wishes not to be tickled.

All of these thoughts are running through my head when thinking about the recent California law and what good it can do for those with young minds. It reminds me too, that consent is not just about sexual interactions. Consent is something we give, time and time again. Consent is also something we don’t give out freely. Assumed consent, regardless of our age, should not be a reality. We should always treat one another as the autonomous beings we are.

Prior to the start of the Fall 2015 semester it became popular news that there were incoming college freshmen at Duke University that were openly refusing to read Fun Home by Alison Bechdel. Fun Home is a graphic novel that depicts Bechdel’s childhood, her relationship with her family and some of the personal struggles her father lived, as a closeted gay man.

Faculty member, Amber Humphrey wrote a response to this refusal to read Fun Home. She brings up extremely important points and argues the point we must be willing to open our minds to the experiences of others. “Education—especially higher education—obliges us to read, hear, and see things that we might not otherwise encounter. Anyone committed to learning must therefore engage with people, perspectives, ideas, and experiences that may at first seem strange, confusing, or problematic. Learning means we attempt to understand—it doesn’t mean we have to like everything we’re exposed to. We can disagree with the authors of the books we read, but we have to read them first. Worthwhile ideas and values can withstand exposure to other ideas and values. But those seeking a university education should be prepared to have the worldview and perspectives they developed at 18 challenged and expanded. If not, why go to college? Or read? Or think?”

The full text of Amber’s response can be found here. 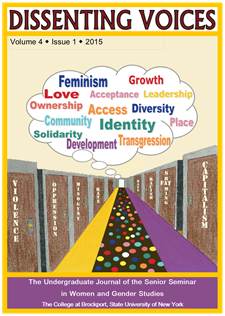 At the end of each academic year, the graduating seniors of the Women and Gender Studies program participate in the Senior Seminar course. The work involved in this capstone WMS course is based on the research that individual students have undertook during their academic career.

The current volume that was published in Fall 2015 contains articulate and unique thesis’s that explore a multitude of contemporary issues, applying a fresh feminist preservative . We welcome you to read the dissenting voices of our accomplished seniors. All papers can be found on the Women and Gender Studies digital commons website.